My plan was to grab some carbs, cram them down my cramhole and wash down with some milk at 1:19 this morning. In classic two-birds-one-stone style, I headed for the cereal cupboard and spied the following where my Cinnamon Toast Crunch, Cookie Crisp, et al should have been: 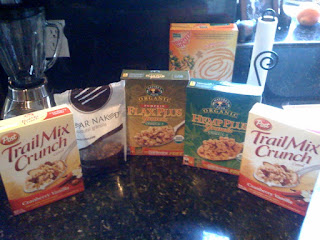 I quickly realized that my wife must be trying to tell me she's a lesbian, and not the good kind either.

I wouldn't be able to ask her until she got back from her camping trip, but the lesson was not lost on me.

After locating the Marshmallow Mateys, I reluctantly put them back in hopes that my wife could look past the fat --at least temporarily-- and not leave me for her girlfriend, Chuck.

Turns out breakfast cereals are mostly created for children who don't have the time to eat candy on the run in the morning, not for rotund adults who cry into them at 1am.

I'll leave you with this stunning fact from the Bureau of Fake Statistics:

4 out 5 marriages fail due to becoming a great big fat person.
Posted by Bill Lloyd at 8:45 PM