When Columbus first landed at Plymouth Rock on July 4th 1492 and drew up the Constitution beneath the “rockets’ red glare,” he made it clear that we the people were about to form a more kick-ass union. Little did he know of the perils that were to come, but he probably wouldn’t have given half a crap anyway. He and his loyal band of Indians were now Americans, and as Americans it was their manifest destiny to get to California to keep the Queen of England from stealing all of the oil.

Nature is not built for human largesse and vice versa. Museums 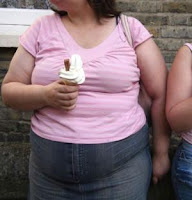 have shown us that cavemen, Spartans, and Jesus were totally ripped. Subsequently, fatties were the minority upper crust of society. The size of their guts mirrored the extent of their wealth, while the vast, poor majority had wicked awesome triceps. In modern times, it was only a few short years ago when a large man, out of breath from grocery shopping or theme park going, may have considered dropping a few pounds or leaving such activities to the more able-bodied. But once that American ingenuity kicks in, you better look the fuck out.

Now, personal mobility devices line the entrance of every Safeway, Winn Dixie, and Six Flags theme park in this great land, allowing the 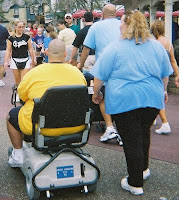 heftier of us to angrily beep our way through crowds of tight, fit bodies. It’s a way of saying, “Hey, just because I’m fat doesn’t mean that I can’t do the things that fat people can’t do!” Rascals and Hoverounds are just the tip of the big fat iceberg.

Check back soon for part two...
Posted by Scott Finch at 2:56 AM