I concede that fat people often have things to contribute to society, technology, and my nightmares. You people are everywhere. We're unfortunately even related to a few of you.

However, business owners beware: DO NOT HIRE FATTIES. Not only do they make the dry heave prone among us more prone to dry heaving but they also make you poor: 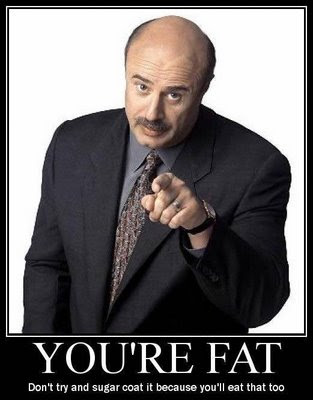 (btw... this reminds me. Scott: I'm going to have to hire someone else to help me out with that thing. Cool?)

About a month ago we proposed something awesome called Fat Bastard Challenge.

Well, the moment is finally here. We went out and actually bought a bunch of crap that's supposed to make you less of a fatass. Now, we're putting some of that crap to the test to help educate and inform our readers (read: Bill and Scott.)

My product came directly from the blog comments: "fat burner pills with sweet looking bottles are the shit."

Taking that advice, I went to The Vitamin Shoppe and had a look around. The first thing I noticed was that, like complete fucking assholes, the founders of The Vitamin Shoppe went with the stupid looking old English spelling of Shop. So it's Shop, spelled Shoppe, which is actually supposed to be pronounced 'Shoopa', as in "Honey, I'm going to The Vitamin Shoopa after I blast my quads." If I hadn't already been standing in the store before I really, truly, noticed what they'd done, that douchebaggery would have cost them a customer. Anyway, established in 1977? Fuck them.

The second thing I noticed was the large display of "fat burner pills with sweet looking bottles." In following with my practice of never preparing for shit, I made sure I knew nothing about what I was looking for. I figured I'd let the label on the bottle be my guide. It took me almost 20 terrifying minutes to narrow it down to these two. 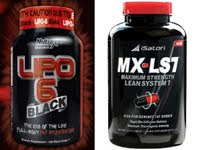 While both labels were a bit scary to read, there were key phrases on them that helped me decide which to go with. What finally pushed me over the edge to review the MX-LS7 instead of the LIPO 6 where these quotes from the bottles.

It says I'll lose my gut 3x faster! Sweet! That's exactly what I want. Well, other than one that'll work 4x faster, but that's pure fantasy.
From LIPO 6:

I was SO close to going with this one, mainly because it would seem like I was a total pussy if I didn't.

However, going from a sans-serif font to and EXTREME dripping-sans-serif font there at the end was a real turn off.
So, I got the MX-LS7 stuff. I don't know what the name actually means, but I'm pretty sure my gut will be 3x smaller when that bottle is empty. Hell, that's what it says right there on the label, next to the asterisk. I'm going to weigh myself, then blast off into the bright, skinny, happy world of tomorrow.
Posted by Scott Finch at 1:48 AM 38 comments: So instead, the internet offers up this gem. An enormous mother pushing her enormous ice cream slurping daughter while a cat pretending to be an emotional Wilford Brimley expresses his concern about the stroller breaker possibly developing DIABEEETUS.

Next week I'll be reviewing the Miracle Diet Pills I bought yesterday, and Bill will take on exercise equipment. Literally.
Posted by Scott Finch at 2:49 AM 38 comments:

Part 1 can be found here.

Luckily, for the fat, humans are really really good at adapting their surroundings to suit their needs. Or, rather, their perceived needs. Some of these adaptations are awesome, and some are the exact opposite of awesome.

Pretty much any modern convenience you can think of was designed specifically to make our lives easier. Embarrassingly, this also includes great big fat people. So, here you go America, behold, the some of the obese enabling inventions you've given the world:

Diet soft drinks - Those 500 calorie sodas can add up pretty quickly. That’s why America invented diet soda, so that Double Bacon Big Burger with cheese combo meal only contains 1500 calories instead of 2000.

Airplane seat belt extenders - Ostriches and penguins may be too big to fly, but not you, champ. As long as you can squeeze your ass through the airplane door, you can safely catch a ride to Las Vegas.

Pistol grip remote toenail clippers- Those thick, long, yellow toenails aren’t going to trim themselves. How about taking off an inch or two while living out your big, fat gangsta fantasies?

Toilet tissue aid - This device holds the toilet paper so you don't have to! There is also a motorized version that does most of the work for you. All you've got to do is keep the fat rolls out of the way and this things does the dirty work. Smells like American ingenuity to me.


In addition to the above products, America has invented medical procedures to get rid of your fat, if’n it doesn’t kill you. The tummy tuck, liposuction, biliopancreatic diversion (shortening one’s small intestine), lap band, and the Cadillac of bariatric surgery, gastric bypass are performed daily. So fuck you, Darwin.
Posted by Scott Finch at 1:41 AM 35 comments: