Back in the Saddle - Fat Fucking Tuesday 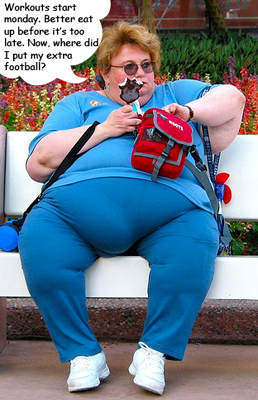 Quick, what's a fat persons favorite day of the week?

If you looked at the post title and said, "It's Fat Fucking Tuesday" then you'd be 100% correct. There's a reason it's called Fat Tuesday, and it has nothing at all to do with New Orleans, or boobs (man boobs not included.) It has everything to do with being fat though. Everything.

As I've recently learned, ANYTHING can derail your attempts to become less fat. Whether it's an office pizza party, a dog opening a window, or your 87 year old grandma crashing her silver 2001 Buick into a semi going 50mph almost three weeks before you're scheduled to reveal your awesome new abs to the world on a lame blog where you whine about being fat. (she's doing fine now, thanks)

So, why is Tuesday Bill's favorite day? Because inevitably SOMETHING will completely fuck up your awesome plans for Monday. A skinny person might say some crap like, "Why not just start on Tuesday then?" Naw, fatty will always wait till NEXT Monday. Always.

Why? Because fat people love to eat large amounts of whatever they can find, and waiting till Monday is the perfect consumption enabling justification to do just that. It lets us say over and over again, "This is my last week to be fat, so I'm going all out and eating whatever the shit I want!"

Like that's somehow different than every single day of our lives? So, we proceed to use the entire rest of the week to belly up to the trough and cram food like this is the last week we'll ever eat Hostess Cherry Pies ever again. (it isn't)

I didn't want to blog about it though for two reasons.

But, here we are. Prepare yourself.
Posted by Scott Finch at 4:42 PM